Dyslexia is defined by the British Dyslexia Association as “a combination of abilities and difficulties that affect the learning process in one or more of reading, spelling and writing” although reading is the most prevalent. It has been estimated to occur in 4% of the UK population, and 10% show some of the symptoms of dyslexia . Accompanying weaknesses may be identified in areas of speed of processing, short-term memory, sequencing and organisation, auditory and/or visual perception, spoken language and motor skills. Persons with dyslexia may have difficulty remembering, recognizing, and or reversing written letters, numbers, and words, might read backwards, and they have poor handwriting. The reading disorder is characterised by reading ability below the expected level for a child’s age, school grade, and intelligence.

There is no magic wand or instant cure.

As an optician, I have been particularly interested in improving reading with personalised prescription coloured tinted lenses / glasses.

Additional studies would suggest that about 30% of children find coloured overlays useful but only 5% of all schoolchildren have a severe degree of Meares-Irlen syndrome.

How can we assess for potential treatment benefit with coloured tinted lenses? 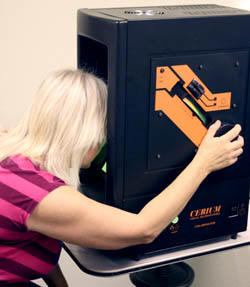 A full sight test to check that the eyes are healthy and to determine if prescription glasses are required.

This instrument was developed by Professor Wilkins in the University of East Anglia with the benefit of a Medical Research Council grant. A positive response to testing with the Intuitive Colorimeter indicates that the subject may be suffering from Meares-Irlen-Syndrome and that coloured tinted lenses may help. The optimum colour tinting varies considerably and may change over time.

In the early 1980s, a teacher in New Zealand, Olive Meares, was the first to provide a detailed written account of the spatial distortions affecting text being read, by some individuals.  Olive Meares also reported that the effects she cited could be reduced or eliminated by the use of coloured paper or by using coloured plastic overlays.  The overlay being placed over the text to be read.

A psychologist working in California, Helen Irlen , wrote a paper describing symptoms similar to Olive Meares.  Ms Irlen , named the effects as Scotopic Sensitivity or Irlen Syndrome .  The syndrome was one in which reading is impeded by distortions of print. She reported that the distortions were positively effected if text was viewed through a coloured filter or overlay.  Ms Irlen went further and established a protocol for screening for scotopic sensitivity and a system for dispensing coloured overlays as a result of the assessment.

There followed a period of time during which the scientific community discussed these findings with a great deal of scepticism. The problem being that there was no satisfactory explanation as to why the treatment of visual distortion of text with coloured overlays should work.  Of course this did not mean that it did not work.  In fact medicine is littered with examples of treatments working first followed by an understanding of why much later.

Reports of benefit from colour came to the attention of Dr Arnold Wilkins of the Medical Research Council. Concerned that the benefit was a placebo effect, he recognised that if colour potentially gave benefit, the colour needed to be selected with precision and with the three aspects of colour, hue, saturation and brightness independent of one another. To allow this selection he invented what is today the Intuitive Colorimeter and used this instrument to carry out scientific research.

Prof. Wilkins and colleagues of Essex University were amongst the first to apply scientific rigor to the study of scotopic sensitivity or Meares-Irlen Syndrome, as it had become known.  The Essex University team set up double blind placebo controlled trials and went on to establish a number of tools for screening for scotopic sensitivity and quantifying the effects of coloured overlays. 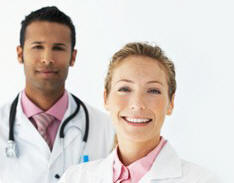 In the past assessment for scotopic sensitivity was generally done by the Irlen Institute, in the USA.  It was quite an expensive assessment and the overlays were also relatively expensive.  Now the Intuitive Overlays Test combined with the Wilkins rate of reading test has enabled practitioners who have been trained by the Institute of Optometrists to carry out an assessment and prescribe an overlay for use when reading. 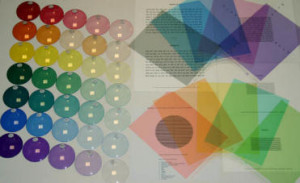 If you or your child is experiencing visual effects such as cited above: text wobbling, moving, flickering, blocking out, underlining, halo effects, head aches, a feeling of over brightness then it would be useful to have an assessment in this regard.

The Irlen Method has helped children and adults worldwide become successful rather than continue to experience enormous difficulties. In addition to dyslexia, patients with headaches, migraine and photosensitive epilepsy may benefit. This method has received international acclaim and Helen Irlen’s work has been included in professional journals, textbooks, National Geographic, TV shows such as 60 Minutes and Good Morning America, ABC World News With Peter Jennings, NBC News and has been the subject of many news broadcasts by the BBC and news shows in Ireland, Hong Kong, Netherlands, New Zealand, and Australia including their 60 Minutes.

The Irlen Method provides a unique service for children and adults with reading, attention, and learning difficulties . But even good readers and gifted students can be helped. At least two million Americans are identified as learning disabled. Many more are labelled as “not trying hard enough” at school for a variety of reasons, including lack of motivation, attention deficit disorder, reading problems, or discipline problems.

Irlen Syndrome, also known as, Scotopic Sensitivity Syndrome (SSS) is a type of visual perceptual problem. It is not an optical problem. It is a problem with how the nervous system encodes and decodes visual information. Academic and work performance, behaviour, attention, ability to sit still and concentration can be affected. Individuals with this problem see the printed page differently, although they may not realize that they do. Having Irlen Syndrome keeps many people from reading effectively, efficiently, or even at all.

Individuals with Irlen Syndrome see the printed page differently from those with normal vision and must constantly adapt to distortions appearing on the printed page. They may be slow or inefficient readers, exhibit poor comprehension, suffer from strain, fatigue or headaches. It can affect their attention-span, energy-level, motivation, handwriting, depth-perception and, ultimately, self-esteem. Irlen syndrome sufferers may be labelled as underachievers with behavioural, attitudinal, or motivational problems. It is a complex and variable condition sometimes found to co-exist with other learning-disabilities.

What is Visual Stress?

Visual Stress is a visual perception problem which makes it difficult for affected individuals to see text clearly. The contrast between black text on a white background makes the letters appear jumbled, animated or blurred. It has been estimated that 11% of the population are affected. Some children initially thought to be dyslexic may be suffering from just Visual Stress.

The classic symptoms are:-

Children who are unaware that they have Visual Stress may come to believe that they must be stupid or slow as they fall below the reading standards of their friends and classmates. This can lead to frustration and lead to disruptive behaviour.

It is extremely important that Visual Stress is diagnosed as early as possible. Some people experience visual stress when viewing text for long periods. The symptoms vary from person to person, but can include headaches and migraines (especially when working at the computer), eyestrain, and experiencing instability of print when viewing text.

Visual Stress can also cause eyestrain and headaches in both adults and children and the non-drug treatment may be effective.

Often these symptoms can be alleviated through changing the background colour on which the text is superimposed. Where colour is proven to be beneficial, the condition is termed Meares-Irlen Syndrome. 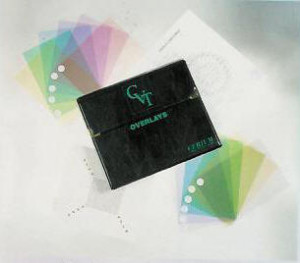 Scientific research has shown that a specific and individual colour, worn as precision tinted lenses, will relieve the symptoms of Visual Stress and allow more fluent, efficient and comfortable reading.

Overlays may be used for screening prior to full testing.

Each individual’s optimum colour will be different and likely to involve a combination of tints. The Intuitive Colorimeter is an optical device that shines coloured light on a page of text and allows the user to vary the light with three controls, one for colour (hue), one for strength of colour (saturation) and one for brightness (luminance). The variation of hue and saturation is continuous. Luminance may be selected from one of four levels. Once the best combination of tints has been determined the Colorimeter findings are introduced into a computer program to ascertain the precision tinted glasses for reading. Children often describe the resulting clarity as “magical”.

For patients who are prescribed Precision Tinted lenses the exact colour of tint that is required can, like any other optical prescription, change over time. Therefore, we recommend testing with the Intuitive Colorimeter at yearly intervals.

“The Intuitive Colorimeter and Precision Tints have become a key instrument for optometrists who care for people with learning disabilities .” 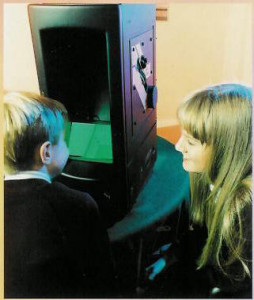 This site is run by Simone Viniker, an Optometrist, based on the London / Essex border.

She also now provides, from both practices, a new system (called Go With The Gobbies) which is aimed at the younger age-group to aid those with dyslexia and visual stress. Clinical trials have found that the eye tracking technique used in this system can be beneficial in aiding those with MS and ME.

“With the news headlines breaking today regarding over 2 million children between the ages of 7 to 11 years likely to be suffering from a learning disorder, mainly dyslexia, dyspraxia and dyscalculia of which only 76000 have been identified, we ask who can identify these children, who is in the best position in the primary health care chain to monitor them and who could provide visual development and training when required.

The obvious answer must be the Optometrist and his team of professionals. So how come Optometrists have not whole-heartedly provided this help and assurance to these children that are their future patients for life.  Whilst dyslexia is not related to poor vision one would have expected the Optician to be the first port of call for many worried parents.

So is the profession up to the challenge, is BABO (a group of behavioural optometrists) providing the necessary commitment and could our contributor from Go with The Gobbies, be offering a simple solution that could be used easily in practice…(NoToFailure.com)

We can supply you with your personally optimised coloured prescription lenses. Our practice is situated in the centre of Loughton in South West Essex and close to North-East London